The 32nd Annual General Meeting (AGM) of the world’s leading Tungsten companies organised by ITIA (International Tungsten Industry Association) in collaboration, this year, with OMCD Group and its subsidiary FILMS, was a great success.

The event was held from 15 to 18 October 2019 in Stresa, with the wonderful setting of Lake Maggiore and a splendid sun that positively contributed to the excellent success of the meeting. More than 250 people from 26 countries around the world participated enthusiastically in this Italian venue.

The first two days were an opportunity for the HSE Committee (Health, Safety and Environment) and the Executive Committee to meet and deliberate on the main issues relating to the impact of Tungsten on humans and the surrounding environment, renew the most important functions, report the exit and entry of new members, make any changes to the Statutes and approve the annual budget. 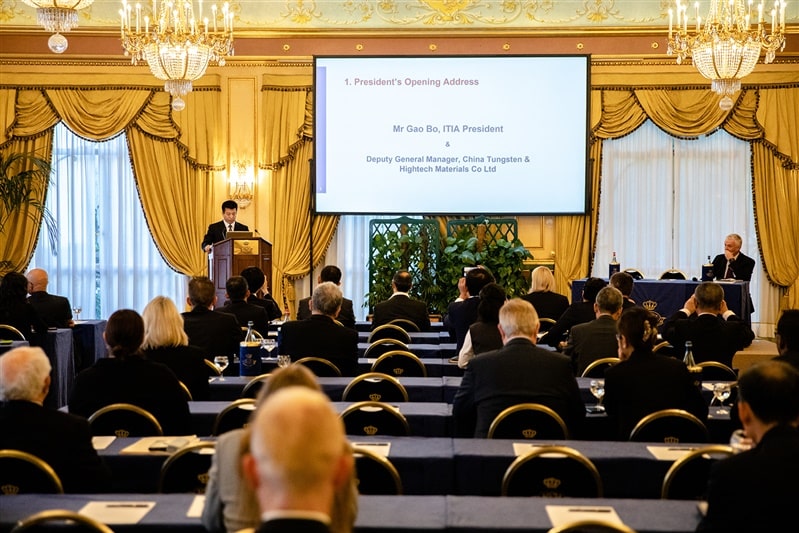 Over the remaining days, several leading speakers from the Tungsten industry took turns on the stage of the Regina Palace Hotel, presenting the market trends (in particular Chinese, Japanese/South Korean, American, Russian and European), the main aspects of the combination of Tungsten and Cobalt in the production of Hard Metal, and the central theme of the discussions in recent years: the recycling and re-introduction of Tungsten in the production cycle.

For the occasion, OMCD Director Mr Alberto Tedeschi presented the history, development and products of the Group and then Dr De Gaudenzi, Head of the HI.Lab OMCD physical-metallurgical laboratory, gave a presentation entitled “The practical impact of corrosion resistance in hard metal applications“.

The discussion forum on the future of Hard Metal (the major application of tungsten) also attracted a great deal of interest. There were a number of questions on demand uncertainty, sustainability, health, safety and environmental classification, as well as the ethical aspects involved.

There were also moments of recreation which encouraged socializing delegates and consolidation of the group spirit. In addition to dinner in the charming Liberty-style lounges of the Regina Palace Hotel, OMCD Group and FILMS organised a very special final evening for their guests, which was typically “Made in Italy”. With a specially reserved boat, on which a rich and imaginative aperitif was served at sunset, the participants were taken to the Lombard shore of Lake Maggiore, to the Rocca di Angera, where they were offered a delicious dinner in the frescoed rooms of the castle. An internationally renowned opera singer, tenor Giuseppe Gambi, was there to provide the evening’s entertainment, warming hearts and uplifting the spirit.

For the final day of the event, a guided tour of the FILMS and Scleros production plants in Anzola d’Ossola was organised, two parts of the Group that work daily with Tungsten, from the mixing of the powders to the production of the finished piece. The participants showed great interest and curiosity, posing many questions to the technicians present.

As a reminder of this event, FILMS wanted to pay homage to its guests with a keychain in Hard Metal, made entirely in its own production plant in Anzola d’Ossola. The book written by OMCD founder Silvio Tedeschi, “Autobiografia di un imprenditore” (Autobiography of an Entrepreneur), was also particularly appreciated. It was given as a gift to each guest and was admirably presented by Poalo Crosa Lenz, an author and mountaineer from Ossola.

The organisers & hosts – ITIA & OMCD Group and FILMS – are very satisfied with the success of this event, which allowed our Group to show our capabilities and our strength, but above all the skills that allow us to stand out in such a complex market.

The diary dates next year, are the 22nd and 23rd of September 2020, in the multifaceted city of San Francisco, for another world tungsten conference, the 33rd AGM of ITIA!

They talk about us…

Diamil’s team always by you side

Focused on the design and production of tools and finished inserts for steel applications, the […]

We are pleased to announce that the VCO area initiative, which views the students of […]